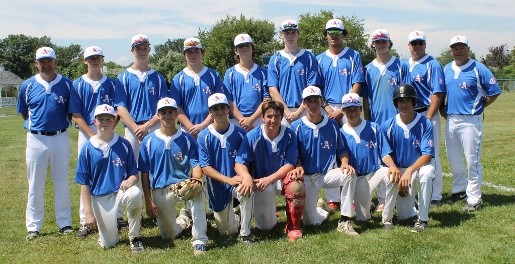 The Aquidneck Island club finished with a 3-win and 2-loss record as the eventual Runners Up team for the tournament.  The team started the week strong with a big 6 - 4 win over Warwick PAL (2-time defending state champs) and then a 17- 3 win against Coventry.  They next faced North Providence-Smithfield and dropped that tight game 3 - 2 against the eventual tournament winners.  The loss dropped the Aquidneck team down to the losers bracket where they again had to face Warwick PAL.  Warwick PAL put up a good fight but behind strong defense, pitching and timely hitting Aquidneck Island pulled out a 4-2 win to advance to the state final.

Aquidneck Island battled in the championship game but fell behind early and was never able to catch back up against a well-disciplined N. Prov.-Smithfield squad.  Catcher Dylan Stahl, from Newport, was awarded the outstanding sportsmanship player award for the tournament. RI tournament champs N.Prov.-Smithfield then competed in the New England Regional, finishing in second place.